Canyoning in Australia is centred around the Blue Mountains World Heritage Wilderness Area which lies just west of Sydney on the south east coast of Australia.

Our approach is probably quite different to the European experience and comes from the geology which formed our canyons.
The “Blue Mountains” are actually a sandstone plateau. At the highest point they are no more than 1300 m above sea level and there are none of the sharp peaks or snow caps which you might expect of a classic range of mountains. Instead, we have elevated, broad rangelands which are heavily forested and sparsely populated. The Mountains are ideally placed to catch rainfall which sweeps in from the South Pacific Ocean. The rain has carved out an unknown number of canyons through the soft sandstone as it makes its way back to the sea over millions of years. 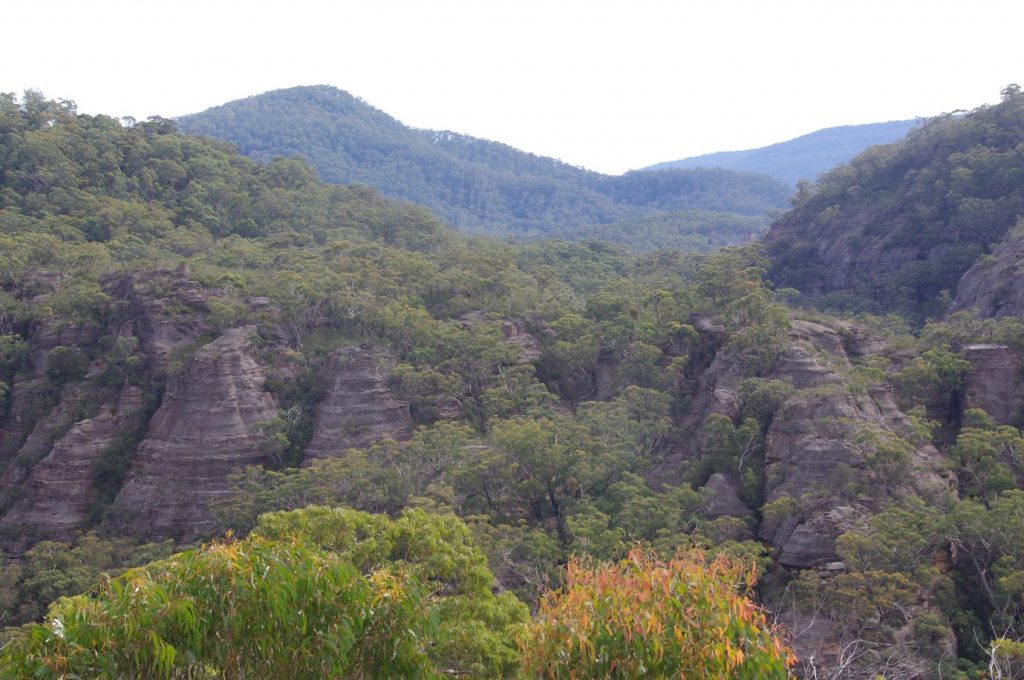 A typical Blue Mountains canyon will start as a small trickle of water high up on a ridge. The small stream gradually gets deeper and wider as it makes its way through otherwise dry forest. The water begins to erode the sandstone as it picks up speed and before long a very deep and narrow slot canyon has been carved out. The vegetation changes within a few metres from dry scrubby forest to lush green subtropical jungle with vines, ferns, palms and tall straight coachwood trees which strive upwards from the deep floor of the canyon towards the sunlight. 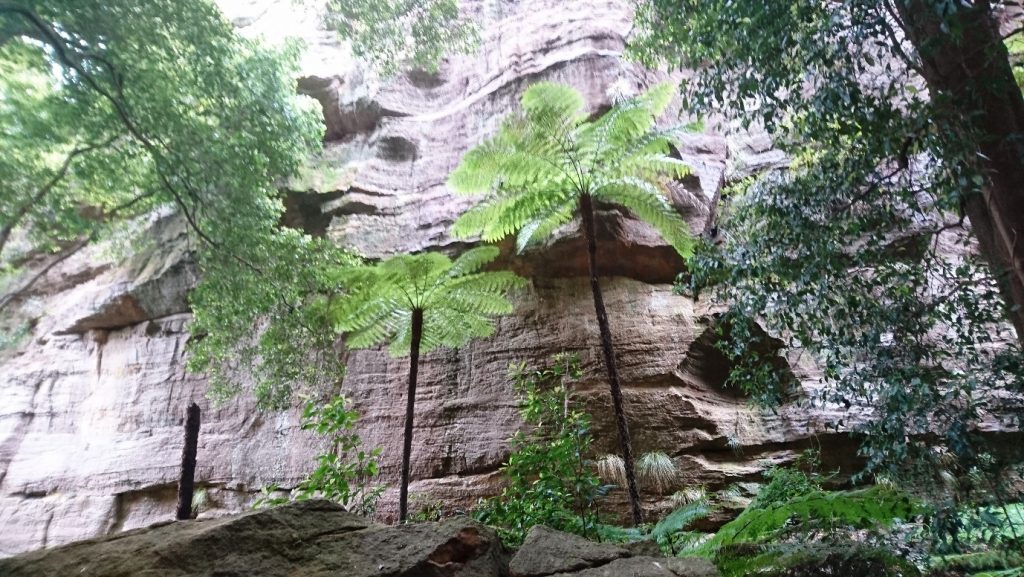 This sudden change in environment is what many canyoners seek. With one abseil you leave the dry bushland behind and enter a wonderful subterranean world which is invisible from the top. 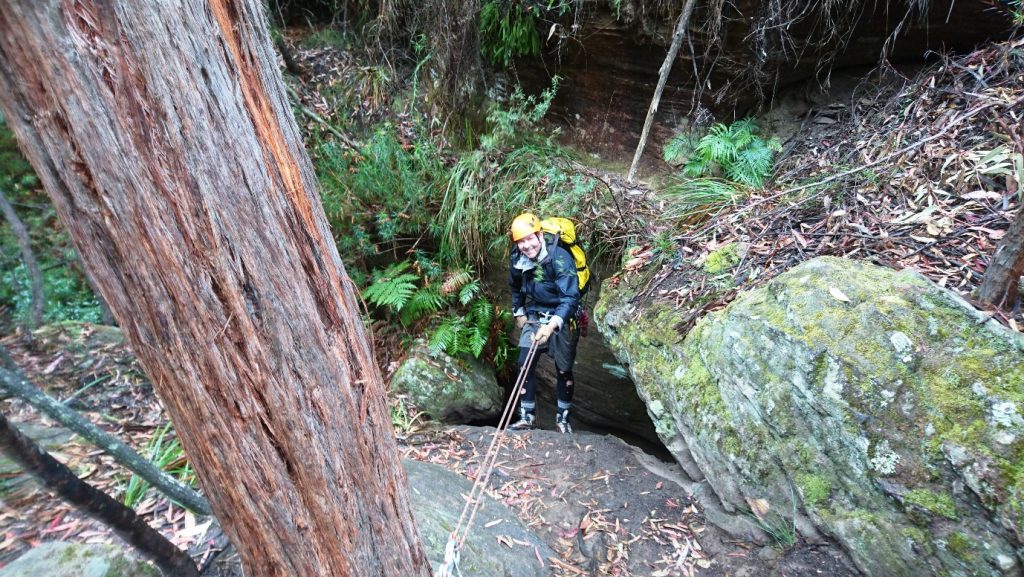 The roots of australian Canyoning

For Millennia this country of deeply carved ravines and the thick forest was home to the Darug, Wiraduri and Gundungurra aboriginal nations who made a good living hunting and gathering. The mountains are populated with lots of native flora and fauna. Kangaroos, wallabies, wombats and an amazing range of birdlife made for a good living for these first nations. Their artwork painted in ochre on rock caves and overhangs is a feature of the Mountains. We always look for hand stencil artwork when we find a cave on our trips. Like the canyons, many of the locations are a closely guarded secret.
Early European settlers struggled to get across the Mountains. They were pushed back by the deep ravines and rugged country for nearly 40 years after settlement in 1788. The first Europeans to cross the Mountains were shown the high ridge pathways by aboriginal guides in 1813 and this led the establishment of faming land on the western side of the Mountains. The Mountain country itself was too steep and rugged to be of any use to the settlers and farmers. 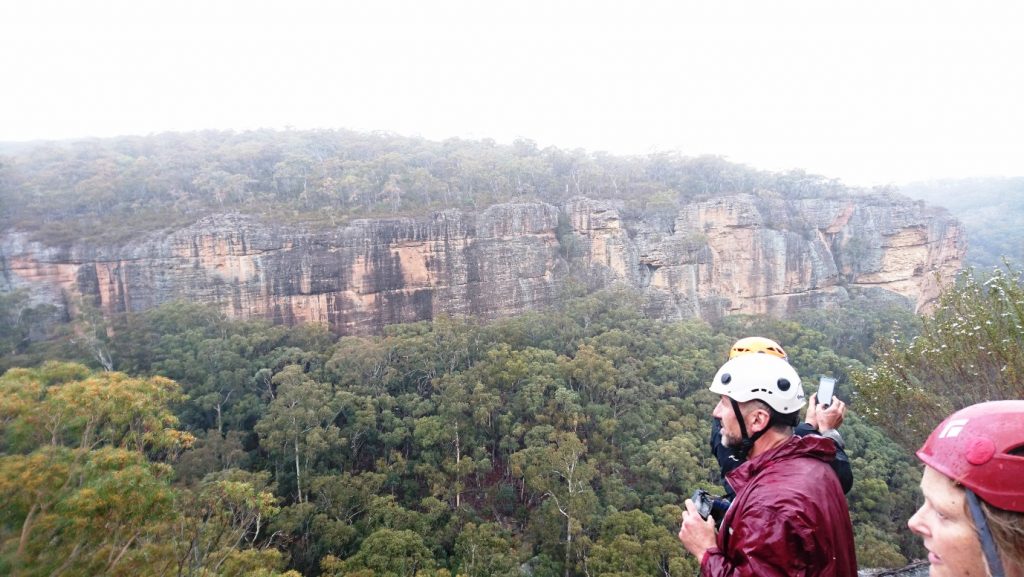 Formal conservation of the Mountain wilderness areas was driven by a committed group of bushwalkers around the turn of the 20th century. Early bushwalking clubs began to push deeper into unexplored areas of the wilderness, occasionally coming up against deep ravines which could not be entered or crossed. Streams would disappear over a cliff and down into a steep canyon which might be enclosed by 50 metre high walls. For a long time access was impossible and the bushwalkers had to go around the canyons on their trips.

From the middle of the century, more adventurous bushwalkers armed with better ropes and climbing gear began to descend into some of these canyons, abseiling over waterfalls and pushing their way downstream, trying to find a safe way to exit further down. They were amazed at the hidden micro climates they found. Canyons were named and rough maps made for future visits. 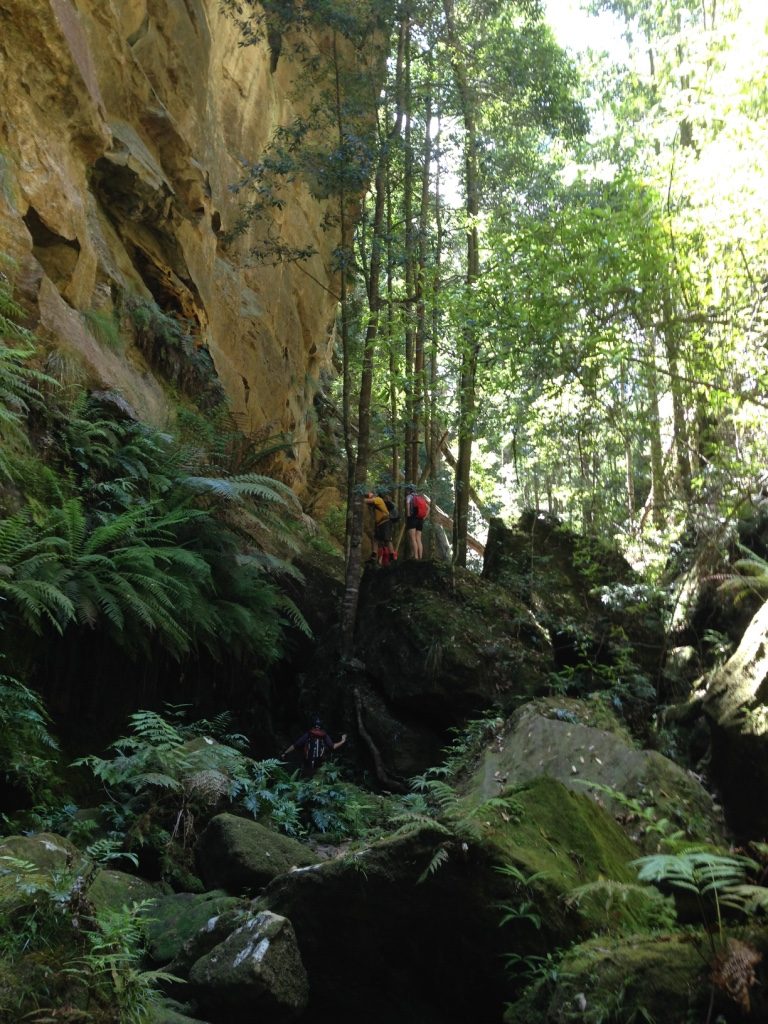 Some of these early Canyoners are now legendary in our sport having explored and named many canyons over the years.
Nowadays, Canyoning is a niche sport pursued by small groups and organised bushwalking clubs. 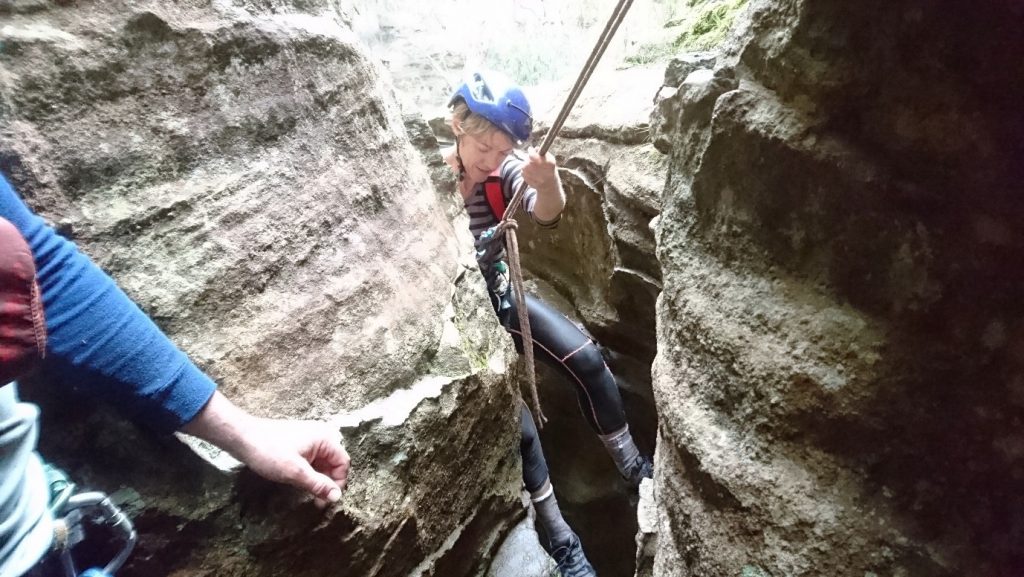 The peak season is summer from December through til March when the water is a little warmer. Wetsuits, thermals and beanies are often worn as there are long periods of being cold and wet as you scramble over boulders and swim through dark passages and wait your turn to abseil down waterfall. Australia is a dry continent and our canyons often have very low water flows and stagnant pools.
Abseil drops can vary from over 60 m – which are rare – down to 5-20 m which are much more common. 9-10 mm ropes are common and mostly used doubled. Hydrobot descenders which make getting off the ropes easier in the water are popular.

There is a lot of debate about canyoning footwear with many canyoners preferring a plain looking rubber soled tennis show called a Dunlop Volley (which cost about $40) over more expensive shoe styles. The Volleys have great grip on slippery, moss covered rocks. Debates about shoes continue whenever you meet a group of canyoners.

There are many well-known and frequently visited canyons in the Mountains and you can find details on these in a number of websites and in books. Some have had rock bolt anchors installed and some are used by commercial tourist groups. It is possible (for a few hundred dollars) to spend a day on an organised tour and see 1 or 2 well known canyons just an hour or two from Sydney.

For the more adventurous, there a many other less well known canyons throughout the Blue Mountains and particularly in the Wollemi National Park. This area is home to the famous Wollemi Pine – whose location is still a strictly guarded secret. Few canyons in this area have established rock anchors and so canyoners have to be prepared to build anchors with whatever they can find. 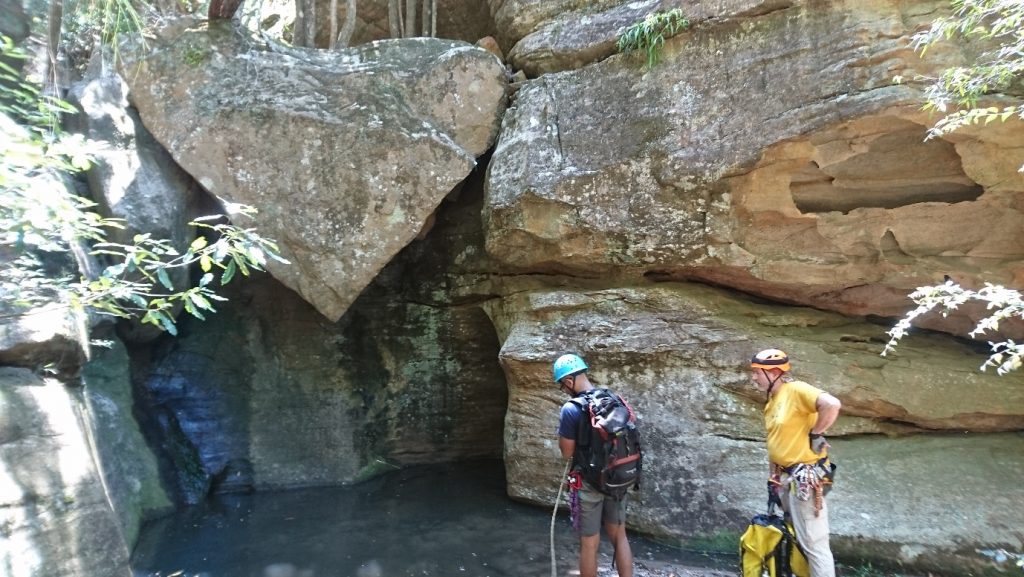 Navigation is also an issue. It is very easy to get lost in the thick forested wilderness where there are no tracks or signposts. The more remote canyons are generally reached on multi day trips visiting a number of canyons. It is common to have to “bush bash” through thick dense undergrowth to reach these canyons. We tend to wear old secondhand clothes and patched wetsuits as clothing tends to be destroyed by the rough vegetation on the walk in and out.

There is an unwritten convention amongst canyoners not to publish location details of canyons north of the Wolgan and Capertee Rivers. This is to encourage exploration and discourage the ill prepared. You will occasionally read a published trip report showing lots of photos and with much detail about the trip and notice that the canyon has not been named and its location not specified. 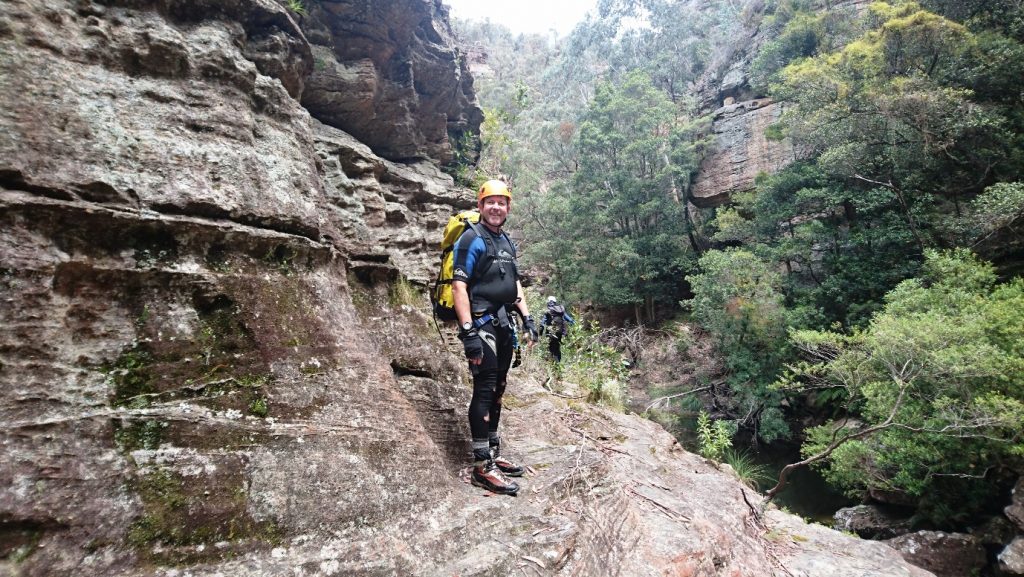 From a personal perspective, my favourite canyons are Starlight Canyon, which has a tunnel section, native bats and millions of glow worms – which make the tunnel look like the night sky, Claustral Canyon which has an incredible tunnel section with three abseils into near darkness over a waterfall, and two canyons which I can’t name on the web in the Wollemi National Park. One of these has perhaps nine abseils and drops into an amazing creek. My last choice is a challenging canyon which starts with a brutal mountain climb followed by some amazing abseils into deep dark constrictions and finally out over a waterfall back into bright sunshine, still hundreds of meters above the river. You can read about Starlight and Claustral on Tom Brennan’s blog. See below. To see the others, you will have to come on a trip.
Our club occasionally hosts overseas visitors who join us for a few trips during holidays in Australia. We like showing experienced overseas visitors some of our great canyons

These links should give you a good idea about Canyoning downunder.
At the height of the Australian summer, there is no better place to be than in the depths of a cool canyon surrounded by crystal clear water, amazing rock formations, beautiful trees and ferns and some good mates. 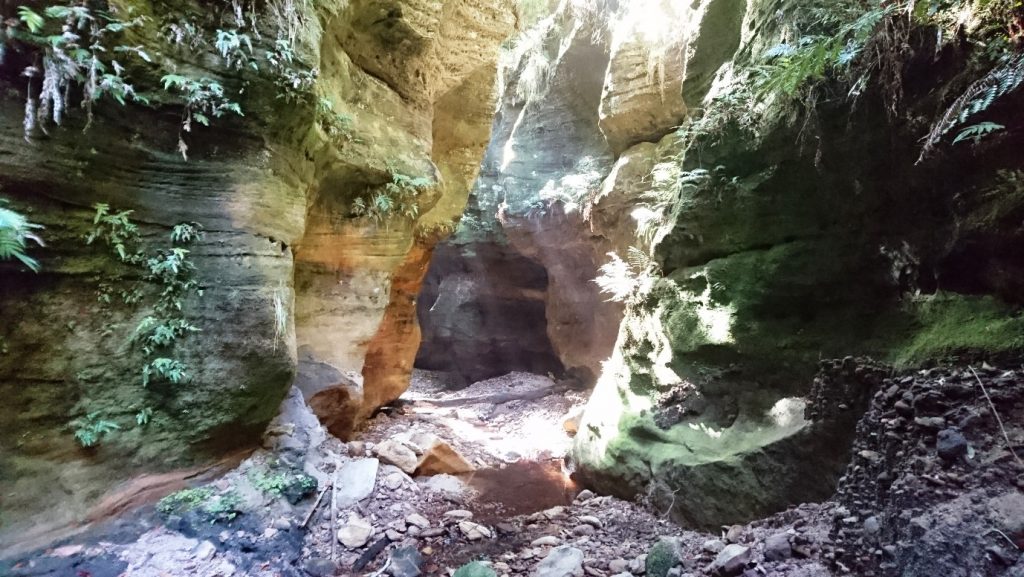