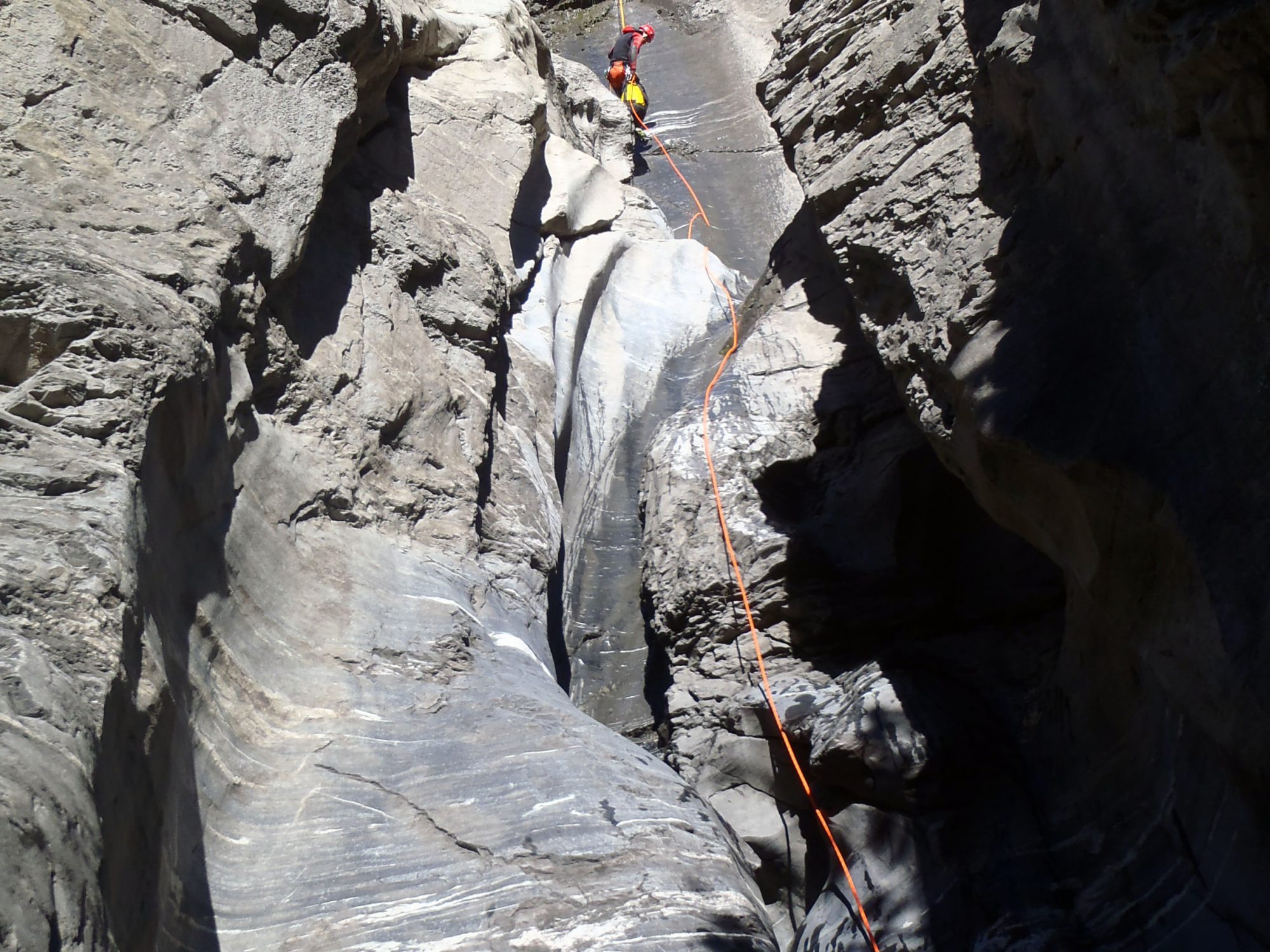 Evening trip trough Interlaken was essential to get daily fix of internet access and some food. Driving up the valley was a bit too late(road is so tight they have a one-way schedule) so we had to avoid some road blocks(there were big rocks on the road, probably rolled down from surrounding vertical walls) before we could set up our camp. As we were finishing our dinner 2 french men joined our crew.

Next day was perfectly sunny again. As it was our “rest day” we decided only to do the lowest part of the canyon. Going for a whole package would mean over 1000 vertical meters of panoramic approach(approx 3-4 hours) followed by 6-8 hours down the canyon so we decided the day is too short and to will take it easy. The last bit however had quite a complicated approach.
Although we had a good description of the way up, we had some trouble finding the right way which is very exposed. Already at first bit of the climb(which is approximately 50 degree slope of crumbled rock) we got an idea of how a random tumble down would end up; I’ve taken out my helmet and lost a bit of my lunch: apple rolled down for about 10m and bounced twice, before it was smashed to bits on rocks.
After traversing first super exposed section we have made it to the woods, still managing the steep climb and finding a way to the top. We even used rope on some of more opened bits,to make sure no one takes the shortcut. Just the very top of our approach the rope was already fixed and it was a very well welcomed help. As we got trough some rock towers our descent started underneath 80m abseil, all the pitches were easy and there was almost no water going down the walls. It was sunny and hot, most different to what we got used to in the last days.
Working as an overlapping team our progression was quite swift and soon we reached the part of the canyon that is not very deep but still quite tight with nice rock formations and windows. The experience intensified until the last pitch where water made a natural window with about 30m abseil that got us right back to the camping place. We were greeted by the rest of the team who stayed downstairs: they told us that they had exactly half a hour out of the shade the whole day….climb was worth a sweat and soaking up well missed sunbeams.
We packed quickly and went for an early start with amazing views…it was a long drive to Laax and again we arrived to our destination in pitch black.