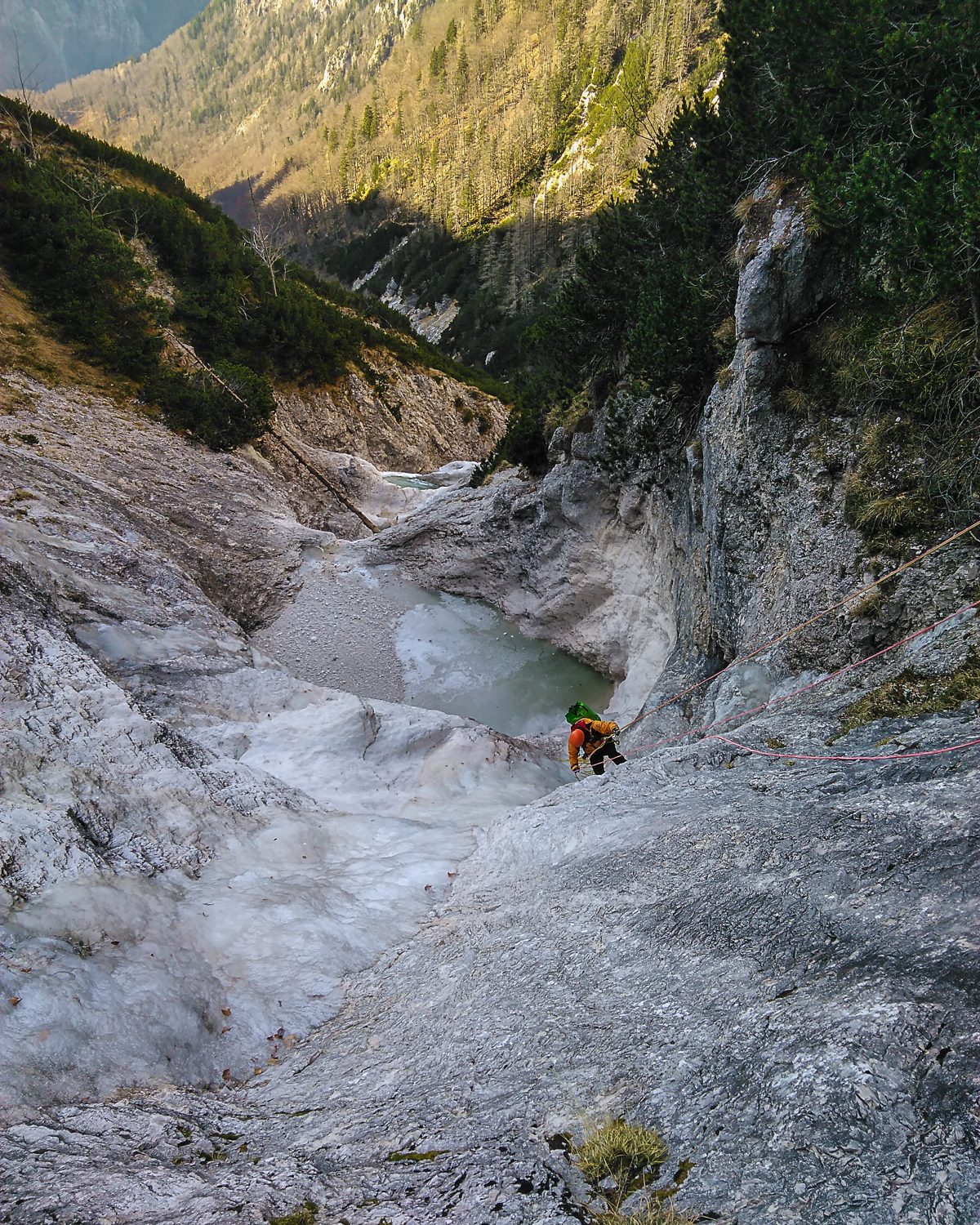 Repov Kot is canyon located below the mountain ridge Zeleniške Špice in Slovenia. Direct translation of this mountain ridge to English would probably be Green Peaks. And I have to admit, when I saw this majestic canyon for the first time, I was total “green” myself, just in the middle of intro tour program at climbing school, so I found this name quite funny. Due to this fact and also my lack of experiences, I decided to return to this canyon some other time. I remember that I mentioned my intensions to my climbing instructor and he was not very thrilled by my plans. “We’re coming here to ice climb” he pointed out, “don’t make our spot popular among people!” After that current event time passed by and months turned into years. I travelled around the world and visited some of the nicest canyons but I always had in mind a hidden gem in my home land, which I have to visit one day.

A few weeks ago I received a phone call from my good friend Jakob and he told me he was thinking about going to this canyon. At first, he had in mind to go there alone, to do it solo, so he came to me to borrow my power drill. But luckily for me he realized he bought wrong types of anchor points for the drill-bit that I provided him with. That is why he decided to postpone his expedition until following weekend when I could also join him. I was thrilled by the plan and an idea of some time off my every day routine.

I usually struggle with waking up in the morning, but I never find it hard to get up early for canyoning tour. And this time was no exception. Jakob picked me up and we hit the road. We parked our car in a parking lot in Jermanica. Canyon is approximately an hour of walking distance away from the there. We met some hikers on the way up, and we assumed they were wondering where we are heading with such enormous amount of gear. Due to fact, that our gear was not only huge but also heavy, we had to take few short breaks during our approach to the canyon, to catch our breath. On one of those breaks I almost ended up without my backpack and all of my gear. I placed my backpack on the path, to stretch my back and could only watch my backpack fall in to abyss. Fortunately for me, it got stuck on one of the trees but it took me a while to get it back and I was also worried about the power drill I was carrying in it. I had to check it immediately after I got backpack to the safe ground and fortunately it still worked fine. Honestly, I never really doubted in German engineering, but when it comes to canyoning, I leave nothing to coincidence. This little accident also reminded me, that I have to get my shit together and focus on canyoning.

After our little pre-adventure we got back on track and full of expectations continued heading to the top of the canyon. When we got there we realized it was completely frozen and agreed we are very satisfied with our decision not to bring wet suits with us, while there was almost no chance to get wet (or so we thought). Landscape full of frozen pools was magnificent. And while this canyon is located quite high above the sea level, there is a many dwarf pines which can be used as anchor points for the rope. We used a part of old rope to bind it around dwarf pines, with double fisherman knot or European death knot. Both options worked fine as opposed to knot “macramé”, which did not work out as we expected it and Jakob named it “hara-kiri technique”. We both agreed not to use it until further notice. 🙂 But no matter what belaying with dwarf pines spared us some time and energy, so made our progress true canyon faster.

The upper part of the canyon went surprisingly well. With deeply frozen green pools on which we were able to walk and surrounded with outstanding nature it made me fell for a moment almost a bit god-like.
The highest abseil was about 40 m long and already equipped with bolt on top, since the waterfall attracts a lot of ice climbers. On the rest of the places where there were no dwarf pines, we placed stainless steel bolts.

Everybody knows time flies when you are having fun and before we realized we were already in the lower part of the canyon. With every meter of our progress, ice got thinner and thinner and it was only a question of time before one of use will land in the cold water. Luck was again on my side. After one of the abseils, there was a big pool, which I tried to avoid with a light swing on the rope and because of a friction climbing on the icy rock I failed my intentions badly and ended up in the freezing water. We both laughed and from that moment on I was the one who had to go down first and checked situation, trying not to fall through ice or into the water again.

It took us 4 hours to reach the end of canyon. Generally, we were positively surprised by its beauty. Probably, I would not list it on top scale of the most beautiful canyons I have ever been to, but it is totally decent canyon to visit after work on a long summer day (after a longer period of rain) or as ice canyon during winter.